Korean mythology – Dangun and the origin of the ancient Korea

Korean mythology - Dangun and the origin of the ancient Korea

October 3rd marks the national holiday when Koreans celebrate the establishment of the first Korean country, Gojoseon (고조선). This national holiday is called Gaecheonjeol (개천절), or the National Foundation Day in English. According to legend, Gojoseon was founded in 2333 BC by the legendary Dangun (단군), before the ancient countries of Goguryeo (고구려), Baekje (백제), and Silla (신라) were founded.

A bear and a god

The legend of Dangun starts with Hwanin (환인), the ruler of the Heavens, and his son Hwanung (환웅). Hwanung had a strong desire and burning wish to rule the earth, as he kept looking at it from the Heavens. Hwanung eventually asked for his father’s permission to descend upon earth and rule over it, to which Hwanin granted. 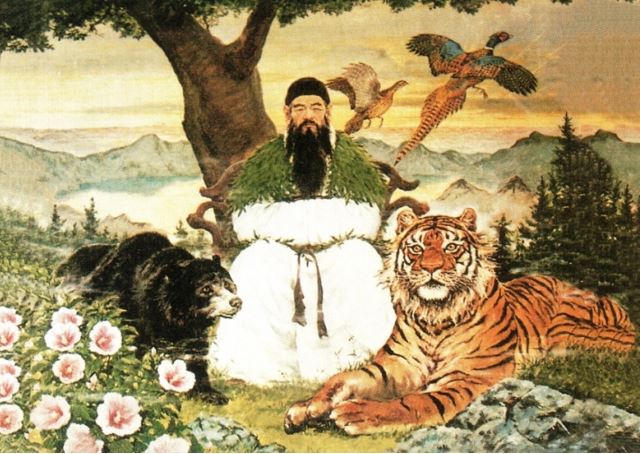 Upon hearing this, Hwanung brought 3000 of his followers and the gods of rain, wind and clouds with him to earth. They descended to Shindansu (신단수, the Holy Tree of Life[SHK1] ) on the mountain Taebaek (태백산), which is called Baekdu mountain (백두산) today. Here, they established the holy city of Sinsi (신시), and proceeded to rule over the earth while educating its people.

​A while after these events, a bear and a tiger prayed to Hwanung, and told him that they wished to become humans. Hwanung, upon hearing their wishes, asked the bear and the tiger to avoid sunlight for 100 days and only eat garlic and mugwort. The bear and the tiger quickly agreed, and retreated to a nearby cave.

​In the beginning, the tiger and the bear did quite well. However, after 21 days, the tiger could not endure the situation any longer and left the cave. The bear, determined to become a human, stayed and fulfilled Hwanung’s request. Hwanung, of course, kept his promise and turned the bear into a human. The bear, finally part of humanity, took the name of Ungnyeo (웅녀, Bear Woman).

Ungnyeo, sad over the fact that she did not have anyone to marry, prayed to Hwanung for a son. Hwanung, moved by the prayers of Ungnyeo, transformed himself into a human, and married Ungnyeo. They soon gave birth to a son and named him Dangun.

Dangun, regarded as the first human prince of the land, grew up to establish his own kingdom. This kingdom was called Joseon (조선), but is generally called Gojoseon (Ancient Joseon) to disambiguate it from the Joseon dynasty (1392 - 1910).

The story about Hwanin, Hwanung, Ungnyeo and Dangun can be found in the ancient Korean texts Samgukyusa (삼국유사, Memorabilia of the Three Kingdoms). Although these books are about the Three Kingdom period in Korea, they also contain records about the  aforementioned characters and their myth. It also details how the people of that time prayed to Dangun on the day of Gaecheonjeol, a custom which is now very rare.

Also, it is in these books that the concept of Hongik-ingan (홍익인간) - which broadly means “to the benefit and welfare of humanity” - can be found. It is an ideology that has been passed down from Gojoseon to present day Korea and has widely affected the culture.

Gaecheonjaeol is still celebrated today to commemorate Dangun’s founding of Gojoseon. Gaecheon literally means “the opening of heaven”, and thus this day is said to mark the day when Hwanung descended upon earth and the day when Dangun founded Gojoseon. It is still debated among historians over Dangun’s existence and the founding date of Gojoseon. However, the myth and the national holiday live on.